Qubo Gimbal review: A great gadget to start with for new content creators By Indian Express 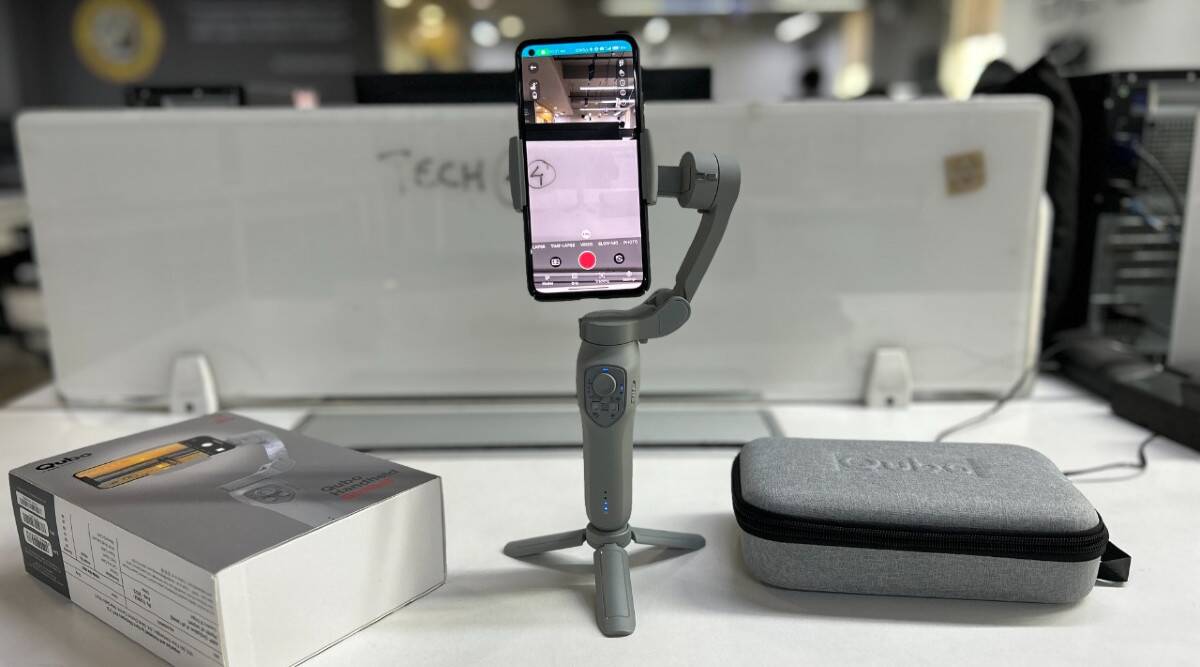 Seeing the success of the short-form video format, many people are getting into content creation these days. And if you’ve scrolled Reels or YouTube Shorts you’ll quickly realise that most creators record on phones. Now, while smartphone cameras have improved significantly over the years, they still have cannot match professional video/vlogging cameras. Thankfully, gimbals exist, and they are helping close the gap. Among the many offerings you can pick up right now lies the Qubo Handheld Gimbal. Qubo is Hero Group’s consumer technology brand. This gimbal is currently selling for Rs 7,490 and has an interesting list of features. I’ve been using it for a week now and here’s my review.

The Qubo Gimbal has a plastic build. Now I didn’t perform any drop tests but the Qubo looks like it can withstand some abuse. It’s got a superb finish and the plastic’s got an ever so slight rubbery feel to it which helps with grip. And the grip is something you’ll immediately realise is vital for extended recording sessions. It is fairly compact and not too heavy at 350 grams. The gimbal also comes with a bundled bag making portability easier.

I quite liked the gimbal’s control buttons, which come with a very tactile feel to them. Thanks to the smartly-designed labels, I was able to tell their functions immediately without having to refer to the manual. My relatively light Xiaomi 11 Lite 5G NE was handled by the gimbal quite well. But heavier smartphones shouldn’t face any problems either, thanks to the 280g weight limitation. The iPhone 14 Pro Max – one of the heaviest of its size – weighs 240g, so there really isn’t much to worry about here. The size will not be a point of concern either since the clamps are quite stretchy.

The gimbal’s setup process through the QuboPro app (available on Play Store and App Store) is supposed to be quick. But I ran into some trouble trying to get the app to detect the gimbal for the pairing process. It just wouldn’t show up even after dozens of tries. A quick scan on Google for any related complaints made me feel I was the only one facing the issue. I then proceeded to try reconnecting one last time, and for some reason, it finally worked.

QuboPro packs all the necessary utilities you’d need for photography and videography. At the bottom you get options to switch between recording modes – All Follow (AF), Half Follow (HF), Lock Full (LF), and First-Person View (FPV). These lie beside the option to switch between object tracking and face tracking. The settings menu lets you change the movement speed, PAN and tilt settings, and video resolution (up to 4K). 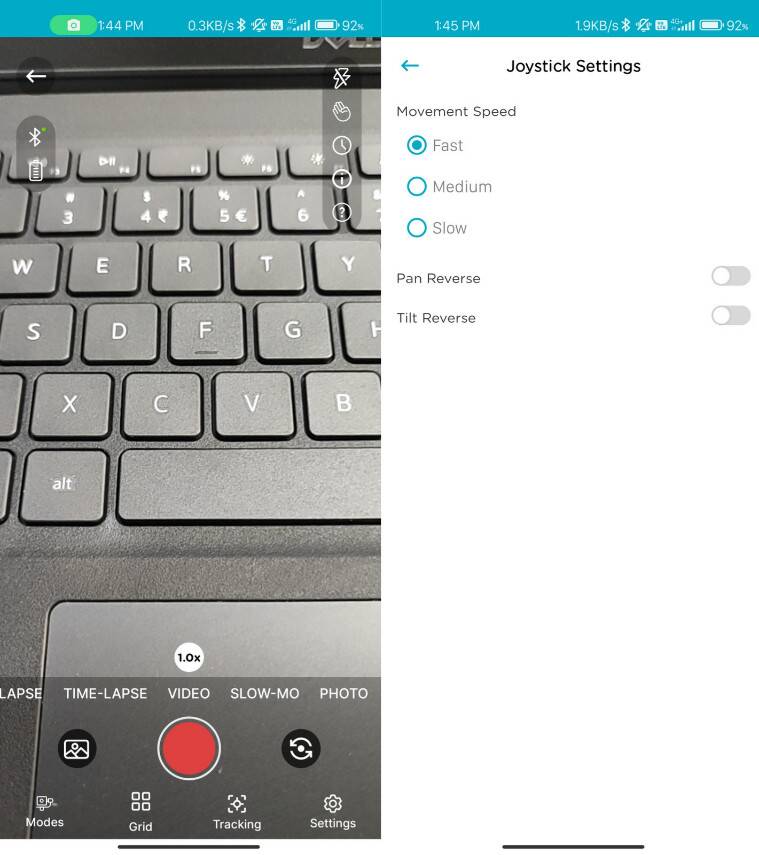 While QuboPro has got a decent UI, its output is terrible on Android. (Image Credit:- Indian Express/WideCare)

Once you’ve fitted your phone into the Qubo Gimbal, using it is a joy. You can use the handle to film on the go or you can fit the tripod into the bottom to convert the gimbal into a tabletop camera. The tripod stand feels fairly tough and is foldable, making it highly portable. 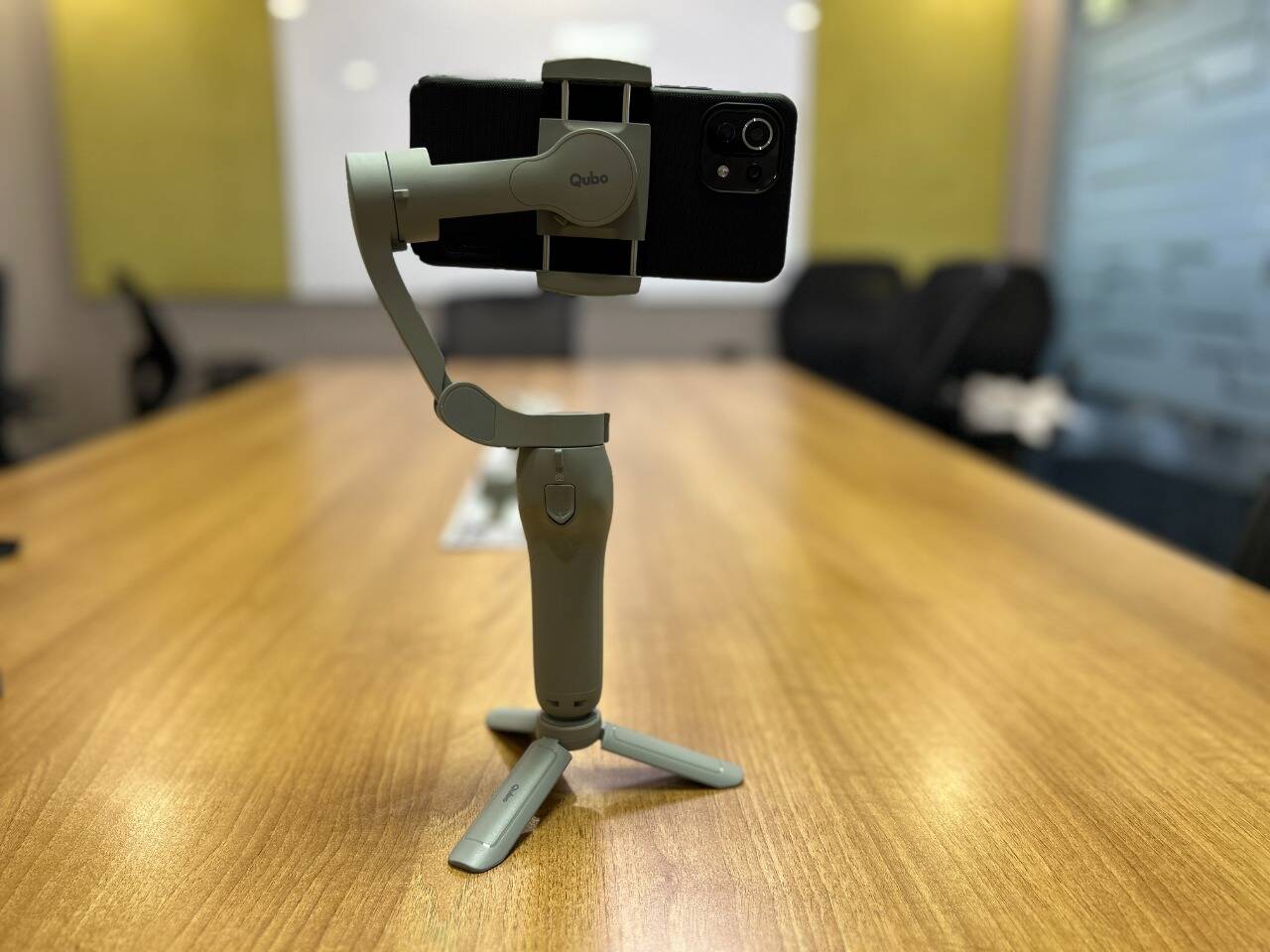 When set on a table using the tripod stand, I found the gimbal’s facial tracking feature highly accurate. It pans according to the position of your face so that it remains within the frame at all times. The only thing you’d have to keep in mind is the speed of your movements, as panning can sometimes be slow at keeping up.

When it comes to stabilisation, I found that Qubo Gimbal does a great job for the most part. But don’t expect very professional or cinema-worthy shots with it. The gimbal was clearly designed for horizontal stability with its three-axis stabilisation and it does an excellent job at getting smooth pan shots. There’s little Y-axis stabilisation though, so if you sprint with the phone in, the footage will still be jerky. I suggest keeping on EIS (electronic image stabilisation) and/or OIS (optical image stabilisation) if your phone comes with it for the best performance. 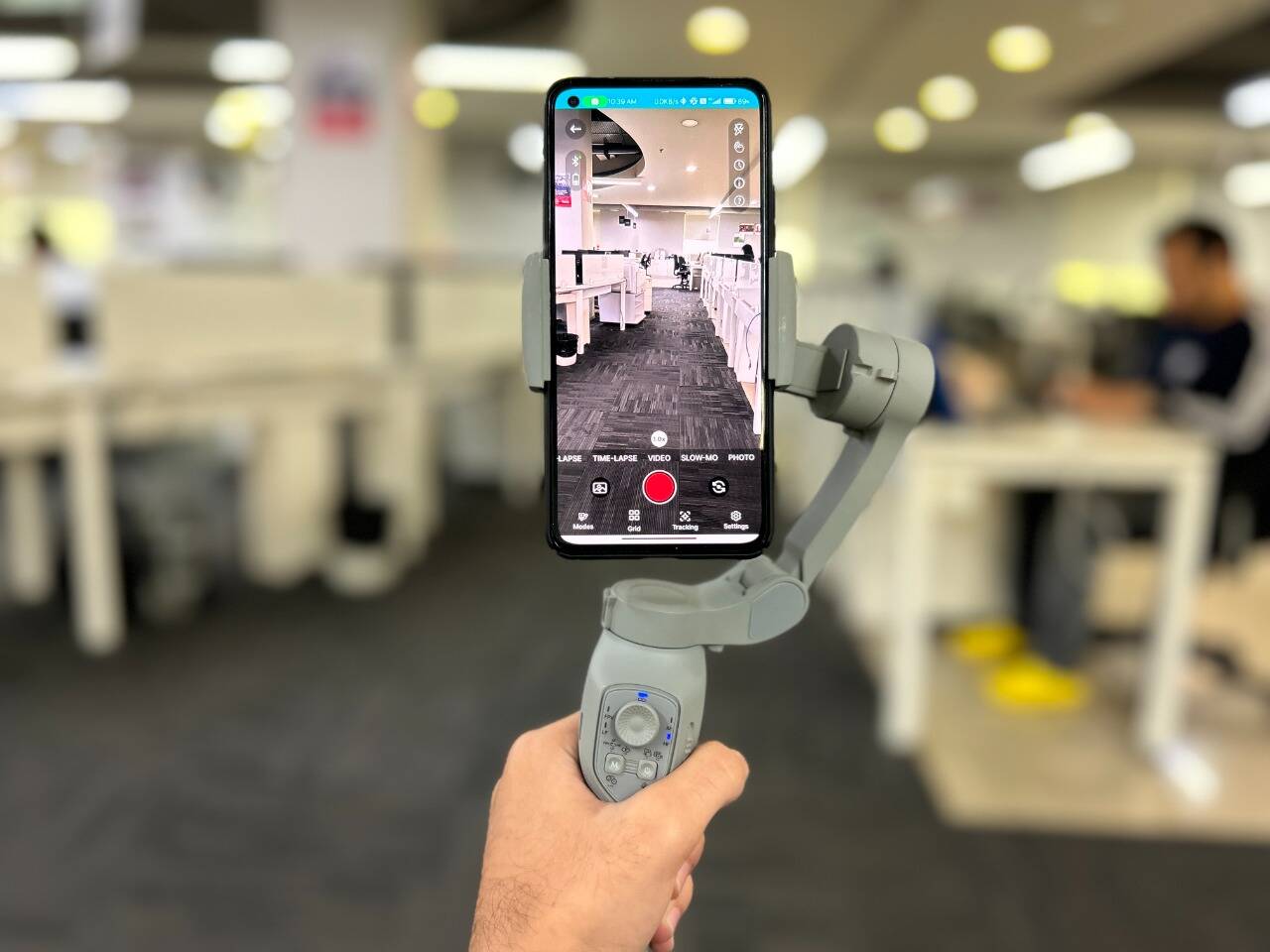 The grippy plastic is easy to hold on to even during extended recording sessions. (Image Credit:- Indian Express/WideCare)

The camera quality that the QuboPro app offers is borderline passable at best. All photos captured through the app max out at a measly 0.9MP resolution, which is inadequate, to say the least. Video recording can be set to 4K, although the footage doesn’t really feel that resolution at all. I wouldn’t blame Qubo for this, though, since poor camera quality through third-party camera apps is a well-known limitation of Android.

To workaround the problem on the OS, you’d want to switch to the default camera app, which works as it should for the most part — the shutter button and the zoom slider respond well, but you lose out on Face Tracking and Object Tracking. The Qubo Gimbal is powered by a 2,000mAh non-removal battery. Qubo claims that the gimbal can last up to 5 hours on a full charge but I found it closer to 4 — not bad at all.

If you are a content creator, then a gimbal is a must-have even if your phone offers stabilisation. Reels and Shorts have become a crowded place and well-stabilised videos can help you gain an edge over the competition. For that, the Qubo Gimbal is a great gadget to start with. Just try to understand what you want it for before making the purchase. If you are looking for a travel companion to record all your sightseeing or if your content calls for recording yourself while being seated, then you and your followers will be pleased with the output. But adventurers should consider something pricier due to the lack of Y-axis stabilisation on this product.